One Book, One New York—the Largest Community Read in the Country—Finishes With a Bang

On April 2, 2018, the Mayor's Office of Media and Entertainment (MOME) launched the second year of One Book, One New York, the citywide reading program that engages New Yorkers to vote among five books for the one they all want to read together.

As it was in 2017, the outpouring of enthusiasm for the program this year was immediate. MOME blanketed New York City with a marketing campaign on subways and bus shelters, and in the city's 13,000 cabs as part of Taxi TV. That campaign was created by our media partners at New York Magazine and Vulture, and featured the five books in contention and how New Yorkers could vote.

After a very spirited voting process throughout April, where tens-of-thousands of votes were cast online, New Yorkers chose Jennifer Egan's ode to the Brooklyn Navy Yard, Manhattan Beach, as this year's winning book.

One Book, One New York is truly an event that unites New Yorkers. In these divisive times, it's very important to the Mayor's Office of Media and Entertainment to create ways to bring the city together. One Book, One New York does exactly that, by sparking civic conversations and creating opportunities for NYCers to gather and share ideas around a common interest.

The program also supports the more than 60 independent book stores across the city, and all 219 the library branches in NYC, by encouraging residents to buy or check-out the winning book.

With the help of the 1500 copies of Manhattan Beach that were donated by Simon and Schuster and Scribner Books to those library branches, the novel soon became the #1 book checked-out in libraries this summer. Dozens of libraries in all five boroughs also created summer book clubs around the reading of Manhattan Beach, with Egan herself, often joining those clubs and video chatting with rabid readers.

As part of the program, Jennifer Egan participated in the PEN World Voices literary festival on April 19th, was featured at Vulture Fest in conversation with New York Editor-in-Chief, Adam Moss in May, appeared at the Strand Book Store as part of the Vulture Insiders Book Club in June, and joined NYU's School of Professional Studies for a lively chat with college students and would-be writers in July.

On September 17th, the three-month-long One Book, One New York program culminated at the Dweck Center at the Brooklyn Library as part of the annual Brooklyn Book Festival, with hundreds of people gathering to hear how the Brooklyn Waterfront and the Brooklyn Navy Yard in the 1940s, provided not only the backdrop for Egan's novel, but also how it became a central character.

Joining Egan at the final event was Zaheer Ali, Oral historian from the Brooklyn Historical Society, Egan's primary researcher for Manhattan Beach and the former Assistant Director, Archives for the Brooklyn Navy Yard, Meredith Wisner, and author/moderator Alexis Coe. That hour-long finale event can be watched in its entirety below and is featured alongside some of our favorite photographs from events and book clubs, both large and small, throughout New York City during summer 2018.

As we close the book on another successful One Book, One New York campaign, we'd like to thank everyone who participated in this year's program and especially those who joined the conversation on social media at #OneBookNY.

We can't wait to get everyone in New York City on the same page again next year! 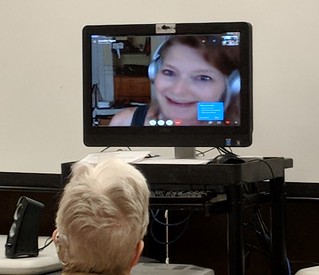