In an era when public housing was segregated, Harlem River Houses was the first federally funded public-housing development built for African-Americans in the United States in 1937.

Harlem River Houses is one of three landmarked NYCHA developments throughout the City, recognizing the development’s and the Authority’s important role in providing housing for New Yorkers.

NYCHA leadership, elected officials and residents participated in an anniversary celebration of the historic public-housing development.


NEW YORK–– This week, the New York City Housing Authority’s (NYCHA) Harlem River Houses marks its 80th anniversary. The historic day was recognized with a resource fair and ceremony on Friday. Harlem River’s history is incredibly important, not only to NYCHA but for the City. Harlem River Houses received a National Historic Landmark designation in 1975 and was listed on the National Register of Historic Places in 1979.

“Harlem River Houses is not only a National Landmark but a New York City asset,” said NYCHA Chair and CEO Shola Olatoye. “New York City set the standard for affordable housing with developments like Harlem River, which was the first federally funded public housing development in the country built for African-Americans. It is important we acknowledge this anniversary and remember our history as we strive to preserve the Authority for future generations of working New Yorkers.”

“NYCHA is one of the last bastions of true affordability in New York City. Its long-standing commitment to housing the most vulnerable residents is embodied through service to over 400,000 residents,” said Congressman Adriano Espaillat. “The Harlem River Houses was one of the first public housing developments built, and in remembering its legacy serving the African-American residents of Harlem, we must pledge to secure its future and the accessibility of public housing for all residents. The NYCHA waiting list is at a record high of nearly 260,000 families, and now more than ever, we must recognize the crucial role public housing plays in keeping our city diverse, affordable, and accessible for all.”

“Public housing is part of our responsibility: to do what we can as a city to provide safe, affordable housing for all. Harlem River Houses, the first public housing development built for African Americans, is a living reminder of that commitment,” said Manhattan Borough President Gale A. Brewer. “On the 80th anniversary of this community of nearly 600 families, we must rededicate ourselves to preserving our public and affordable housing and building more of both.”

The anniversary was honored with a joyous celebration with recognition of past and current residents, a Mayoral proclamation and performances from the youngest to the most senior residents. The Children from the Mary Watson Day Care Center, located at Harlem River Houses, sang for the crowd. They also performed the Langston Hughes poem “My People.” The Lincoln Senior Center members also performed during the celebration with Sister Sledge’s “We Are Family.”

Harlem River Houses was opened on October 1, 1937 with funding from President Franklin D. Roosevelt’s Works Progress Administration. It was built during an era when public housing was segregated and was the first federally funded public housing development for African-Americans in the United States.

The development is also home to beautiful artwork throughout its grounds as well as the smallest branch of the New York Public Library, the Macombs Bridge Branch.

Notably, Harlem River Houses was designed by John Louis Wilson. He was the first African-American graduate of Columbia University’s famed graduate school of architecture and the founder of the Council for the Advancement of the Negro in Architecture, which later merged with the American Institute of Architects. Wilson pioneered the use of large courtyards, open spaces, the planting of trees, and community rooms – many of the features known to be vital for healthy housing. 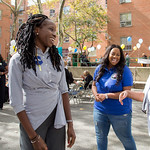 About the New York City Housing Authority (NYCHA)
NYCHA’s mission is to increase opportunities for low- and moderate-income New Yorkers by providing safe, affordable housing and facilitating access to social and community services. More than 400,000 New Yorkers reside in NYCHA’s 326 public housing developments around the five boroughs, and another 235,000 receive subsidized rental assistance in private homes through the NYCHA-administered Section 8 Leased Housing Program. For more information, visit www.nyc.gov/nycha and for regular updates on NYCHA news and services, connect with us via www.facebook.com/NYCHA and www.twitter.com/NYCHA.